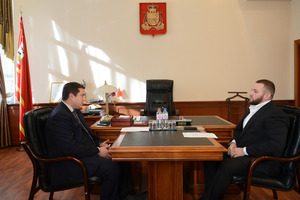 This was announced during a working meeting between Governor Alexei Ostrovsky and the Director General of JSC Glass Market Nikolai Savchin. The parties discussed the implementation of the investment project in the Smolensk region, as well as the company's plans to expand production activities.

Recall that the Roslavl Glass Market is one of the largest glass factories in Russia. The company, equipped with advanced equipment, specializes in the production of glass containers for the food and perfume industries. This year, Glass Market almost completely bought out the property complex of the Sittall enterprise (Roslavl glass factory), which since the late 90s of the last century was one of the leaders of the Russian market in this industry, however, was forced to suspend its activities in connection with with a difficult economic situation and accumulated debts.

According to Nikolai Savchin, the company is developing dynamically. Today, the plant employs about 725 people. Work is constantly ongoing to increase salaries and bonus payments. Glass Market managed to attract large customers, including, for example, the Russian Standard company. Negotiations are ongoing with the Khortytsa enterprise. For the first half of the year, almost 660 million rubles worth of products were produced, some of which are exported to the Republic of Belarus, Armenia, Azerbaijan, Austria, and Germany.

“With the help of the regional Export Support Center, our factory participates in international exhibitions. Currently, the issue of subsidizing costs for the organization of international transport is being studied. Negotiations are underway with foreign European companies, in particular, Polish and Lithuanian, about the beginning of the supply of glass products. For the first half of the year, the share of export contracts amounted to about 34%. We expect that over the next six months we will increase this figure to at least 50%, ”said Nikolai Savchin.

The immediate plans of the enterprise management are the construction of a third glass furnace and the launch of a new production line. This will additionally create about 200 new jobs, increase the tax base, attract new customers and new investments.