Step by step, but only forward! 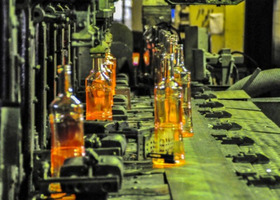 GLASS MARKET JSC is gaining pace of production - a plant that for many years we have known as Sitall OJSC.
We remind the reader that for more than five years in a row we, both in local and regional newspapers, have constantly come across reports that the Rosalll glass factory "Sitall" after the departure of General Director L. Prokopovich from it, is not just a fever, but with new leaders literally crumbles, falls into a debt hole, people flee from there.

Millions of debts for energy, falling production, tax evasion, disruption of wages, etc. - all this inevitably led to the collapse and bankruptcy of the once legendary enterprise.
Rumors were creeping around the city - they closed the "glass", "they stole the plant," "the authorities are inactive," "they don't give a damn about everything" and the like. Some media outlets, seeking to outstrip each other, added fuel to the fire even more, citing the opinion of anonymous former factory workers.
But one cannot but give credit to the local, regional, and federal authorities - the plant was not abandoned. We will not bore the reader with a listing of everything that has been undertaken at various levels. Let's say briefly - EVERYTHING HAS BEEN DONE to keep the company afloat, to give the plant the opportunity to survive the most difficult period, to save jobs and begin to overcome the crisis.
And today, with great satisfaction, we can state that the plant lives, develops and has large plans for the future supported by accurate calculations.
The General Director of GLASS MARKET JSC Nikolay Vasilievich Savchin and his business team managed not only to stop the plant from falling into the abyss. Following exactly the developed plan, they are working today not only on the implementation of a promising production program, but are also actively raising the “social network”.
The former team of the company was supported by the former head of Sitall, and now the adviser to the CEO of GLASS MARKET, Leonid Valerianovich Prokopovich, who categorically refused to work with the leaders of the plant breaking up the plant.
The chairman of the Smolensk Regional Duma I.V. Lyakhov, who drew Leonid Valerianovich’s attention to the fact that, finally, a promising young director appeared at Sitall, began to play his part in the decision (and this is known from reliable sources). go on well. And Prokopovich decided not to put forward his candidacy in the regional Duma for the next term, but to return to the plant to help him get back on his feet as quickly as possible.
- In Nikolai Vasilievich Savchin, I saw a man who does not seek to row for himself, but wants to do something useful for the plant, for people. I could not help but support him, ”says Leonid Valerianovich.
This tandem - of youth, energy and a desire to understand the essence of the matter of the director of GLASS MARKET, combined with the vast experience and professionalism of the former head of Sitall - could not help but give a positive result.
Here is the certificate prepared at the factory for our newspaper:
“At present, the scope of GLASS MARKET JSC is the manufacture and decoration of glass containers for the food, alcohol and perfume industries.
In the process of deciding on the start of activity, the production and financial models were worked out, a business plan for the enterprise’s work on two glass melting furnaces instead of three was drawn up. As a result, three additional lines were launched on these furnaces within 9 months, which significantly increased production capacity. (By the way, the representative of the Smolensk region governor in the Federation Council, Franz Adamovich Klintsevich, was present at the launch of one of the lines).
The growth in production amounted to 38% (from 4183 tons in July 2018 to 5795 tons at present). In quantitative terms, currently produced 17.4 million units of bottles compared with the release for the same period last year 12.6 million units.
The volume of sales of finished products is also increasing. If in May 2018 it was sold for 83 million rubles, then in May 2019. - already by 124.2 million (an increase of 49%)
The company's management aims to develop new markets for glass products and restore lost positions. As a positive example of this, we can cite the resumption of commercial relations with LLC Russian Standard Vodka (hereinafter referred to as “RSV”). This company occupies a leading position among manufacturers of alcoholic beverages. Moreover, at the suggestion of RSV LLC, a project is being jointly developed to launch a line for the production of large-format glass containers. Today, there are no analogues of the production of these products in Russia, despite the existing demand.
Throughout its existence, the company "GLASS MARKET" operates on its own working capital, timely paid salaries to employees, 86 million rubles were paid to the budget and extra-budgetary funds. taxes and fees. "
Growing in the factory and the team. In the last three months alone, more than 60 Roslavl residents came to work here. Now the company employs 716 people, and