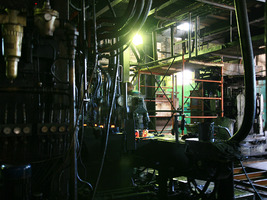 Recall that JSC "Sull", which is now called the "Glass Market", was founded in 1936. In its development, it went through all the stages of formation: from an ordinary glass factory to one of the leaders in the Russian market for the production of glass containers. The factory during the Great Patriotic War was completely destroyed, but after the war it was restored and already in 1950 produced about 35 million bottles a year.

For many years, Sitall developed dynamically. However, during the economic crisis, due to huge debts to gas companies, he found himself in a difficult situation: he was disconnected from gas consumption and stopped production.

Today, the situation has radically changed for the better. Bankruptcy proceedings have been opened at the plant, and work is underway to pay off debts in all areas.

“The once unique enterprise for the Smolensk region was on the verge of collapse. Now it is on the rise, stability has appeared, a sales market is being established, there are no failures in the payment of wages. A technical program has been developed that will allow launching two lines in the near future. This will provide additional jobs, which is very important for Roslavl, ”said Leonid Prokopovich, the head of Sitall in 1993-2010, who devoted more than 35 years of his life to the plant.

According to the director general of Glass Market LLC Nikolay Savchin, currently the company employs 860 people. The plant produces 700 thousand bottles a day, and thanks to the launch of two additional lines, it is planned to increase production by another 100 thousand. The company produces glass containers for food liquids, alcoholic and perfumery products, which are sold in all regions of the Central Federal District and the Republic of Belarus.

According to the guests, it is very important to return the enterprise to its former trust. The guests got acquainted with the production technology, visited the machine shop, where a powerful furnace from 400 tons of raw materials produces glass, visited the glassware decorating workshop and witnessed how droplets of glass fall into glass-forming machines, and the product is manufactured.

After examining the enterprise and talking with the factory workers, Franz Klintsevich noted: “The situation has changed, experienced specialists who know the production very well are returning to the factory. I am sure that the difficulties will be resolved, and after the launch of two lines, the enterprise will begin to work with new opportunities. ”
Based on the results of the visit to Glass Market LLC, it was concluded that it is important for the plant to provide support both at the regional and federal levels, so that it builds up capacity and receives as many orders as possible.